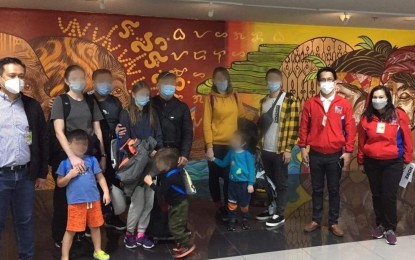 Filipino nationals and their Ukrainian partners and children arrive in Manila from Ukraine on Sunday (March 6, 2022). The evacuees have fled the war-torn nation following the invasion of Russia in February. (Photo courtesy of DFA-OUMWA)

MANILA – Davao City is willing to accept refugees from Ukraine where an ongoing war with Russia continues to displace thousands of people.

Ukrainian Ambassador to the Philippines Olexander Nechytaylo on Thursday said Mayor Sara Z. Duterte personally wrote to him three weeks ago about the offer.

"I got a letter from the mayor of Davao Sara Duterte, she was informing me that Davao City is open to receiving any refugees from Ukraine, and they are ready to provide some facilities and some support to Ukrainian refugees," he told reporters.

"It also reflects the genuine compassion and empathy of the Filipinos. We know that you have also very one history of harboring the Jewish population during World War II. So again, those are the things that we relate to and we appreciate very much," he added.

There is no official count from relevant government offices yet, but the Department of Foreign Affairs earlier said some Ukrainian mothers along with their children were among the first wave of refugees who arrived in the Philippines.

Nechytaylo said the Ukrainian Embassy is likewise requesting data from the Bureau of Immigration.

The envoy thanked the Philippines for supporting the recent United Nations resolutions siding with Ukraine, seeing this as a "very strong demonstration of solidarity and support".

"The values that we are fighting for are paramount for our very existence. These are the values of freedom, our free choices. We will never accept any ultimatums, any attempts to impose somebody's rules on us," he said.

"{F]or us, it's the existential struggle, and we believe that we are fighting for the values that are common for the whole of humankind, not just for Ukraine. I think Filipinos share the same values and that's probably why we have so many connections on people-to-people and not just official level," he added.